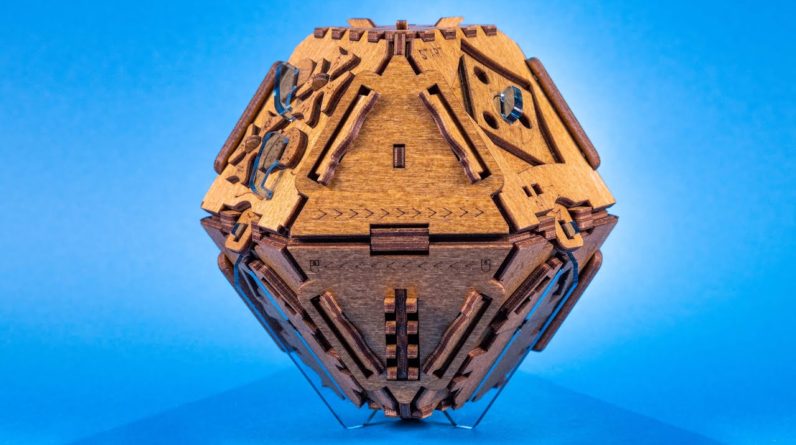 Hi and welcome to another episode of Mr puzzle with two puzzles. I guarantee you. You have never seen before I’m talking about these two puzzles here that are part of a Kickstarter Campaign which just went live today. The Philosophers, Stone puzzle and the anti-gravity device, both of them are escaped rooms in a box designed and made by a small group of people in southern Germany and, if you’re interested in getting one of these. Of course, you can check out the link in the video description or the link up here in the upper right corner to check the campaign out and get one of these two or both of them.

Of course yourself. So, let’s just have a first look. I’M gonna do only one of them in today’s video and let’s first have a look at the anti-gravity device which looks like this. I unboxed them before. By the way, you can see these unboxing videos in my Instagram stories when I receive the puzzles – and this is how it looks like by the way here on the box – it’s in blue color.

This one in reality is in red color. I think I’m gonna turn my ring light on, so this is better. Yes, it’s a tattoo, even though it seems oh yeah, with some ball mazes to unlock it. There are also some steel balls in here. Don’T want to show too many details of this one, since I will do it in a future episode and this one I will do today.

The puzzle potato is called the Philosopher’s Stone and it looks really like a little potato. To be honest, a very beautiful potato, but somehow it reminds me a bit of how many 12 surfaces I think, or six and six yeah 14 surfaces wow it’s a puzzle box. Both of them are puzzles, boxes, I’ll use Mark to start and okay. This is oh, yes, oh, this is gonna be looks. Very promising.

Task is to open it up. Of course you can use it or reuse it as a puzzle box for Christmas, for example, if you like so but first first, you need to somehow open it up, and this is what I’m gonna try it in today’s video and after Spotify, you’re gon na See my first attempt trying to do so by the way I forgot to mention difficulty rating four out of five and 60 to 90 minutes solving time and h14 plus just a few curious, and now let’s have a look at the Box itself. So there are these markings. I noticed this one, this one and this one down here, so it probably means you need to orient it some more like this. Oh, this is barely visible inside so kind of tricky to see it seems this disc is somehow sliding around.

There are a lot of symbols inside, but they are misaligned. Some are with holes and it’s hard to see them. So when I put it here, this hole is aligned. Oh and here I can see some symbols. Yes, many many symbols, a moon, a 24 or something can I find those things somewhere else?

Yes here, so these two symbols are inside there. Okay, so these are it’s an e6cr, so this one this one, this one well there’s also 24

I call this 24 yeah, but nope something just happened and why did it come off? I don’t know. Let’s continue here. I mean okay. I obviously did something right.

It seems I have no idea what I did, but whatever I did here in the beginning, it seemed to be right because it released these parts yeah. So let’s look for the next one. This one here should also come out at a certain point. Probably – and there was another one – this one here with this locking mechanism – which I cannot get connected to anything else here – oh I had to use this thing here as a tool to get the other two out guys. I’M completely lost on what’s going on here, so I unlock the first one randomly.

I took out this thing and I put it in here: release the second one. The locks look the same, these things look different, they have different markings on them and what should I do with this one here? I see no hint telling me how I should get out this one as well as these numbers. I see a lot of numbers here: 30, 40, 20, 30 and so on. There are some different cuts here, as you can see. No, those two look the same and the other two look the same.

Does this maybe match somewhere? Does anyone else also have this? Maybe not only this one and then we also got these different signs here on them, see these different squares. But what about this one? I don’t get it!

Oh, you see how well this fits here. Ah wow, okay, okay – and this fits like so ah, okay. Now I got it: you’ve probably seen this from the beginning, but for me it was well hidden, oh and the leaves probably need to connect. So I need to hook this in here and move it to a position where it fits with the leaves on there. That’S cool, so this one needs to be all the way down.

I’M pretty sure if I can pull this thing out here and I can pull it out when or if I have the right combination here. These are only four sliders, but four sliders means. I have like ten one, two, three, four, five, six, seven eight.

You know he is zero. Here’S 180 and 170 degrees. It will drop down here’s the locking mechanism by the way yeah you’re blocking these from getting rotated and then it’s interlocked with those something like yeah. Okay. This one was here: you can see it up here.

Okay, this makes sense, and then this one was the one that belongs here, and here came this one up here, and this only goes on. If I push there’s this tool in here like so and here I have no idea, you have no idea what I did okay, so I think I got this one. There are always like two symbols at the same time, if you’re lining properly so here’s the Sun and the Moon, and if I move it to the other – and this is why there is – there are several holes in it. There is the Omega, like symbol here and other strange symbols of this one and the Omega needs to be aligned and the moon and the sun need to be aligned. Now I got it, I think so when here we go so this is how you move this thing.

No! No! It’s wrong! It’S the wrong item. I think now it should work since it’s this symbol and the omega symbol and then the Moon and the Sun.

Yes, so, oh so you got in difficulty. I would rate this with a that’s. It’S. I think it’s something between level three and level four. The only thing that was really tricky for me to understand is this one, but basically it’s pretty simple, so I would tend to rate this as a level three out of Maximum five for my personal difficulty rating scale, but can also forward to try this one. 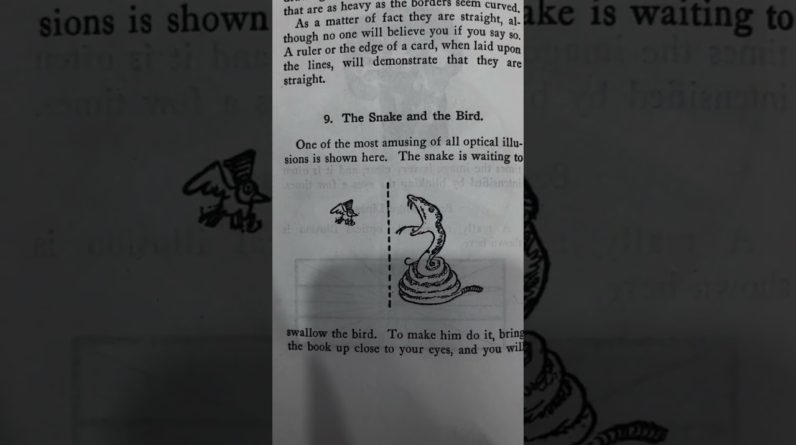 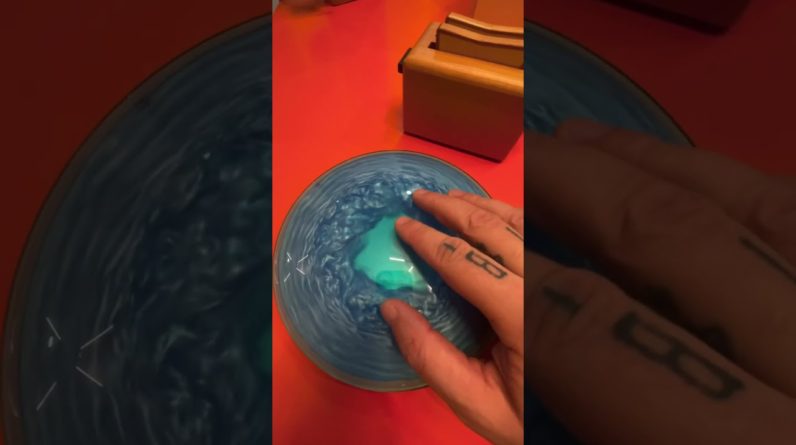 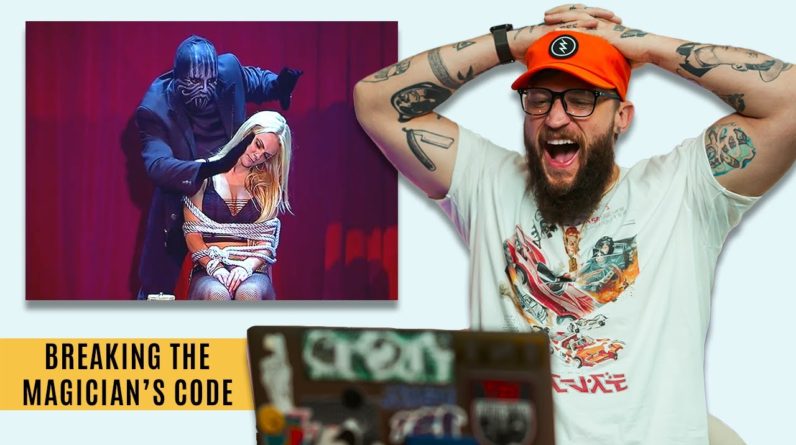 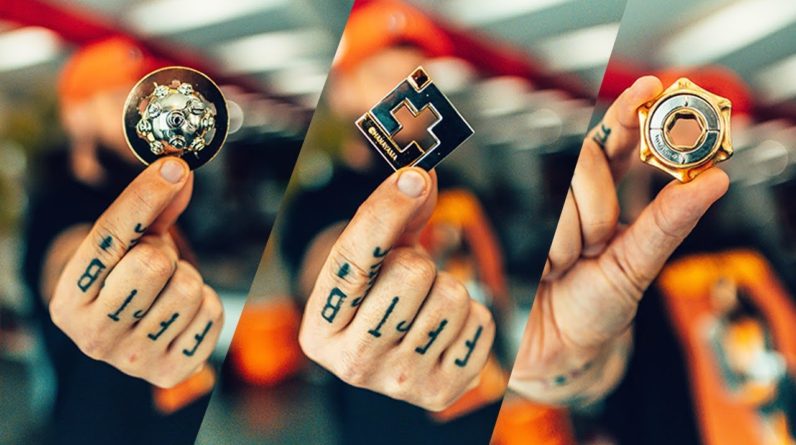 These 3 Puzzles Will Break Your Brain!! (Cross, Valve & Planet) 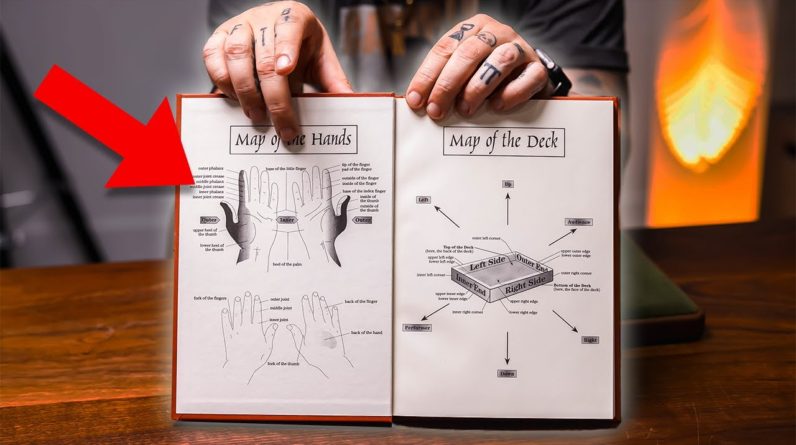 The SECRET To Learning Sleight of Hand!! 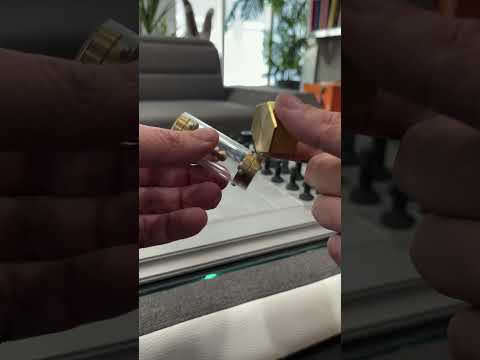 Can You FREE Houdini?!